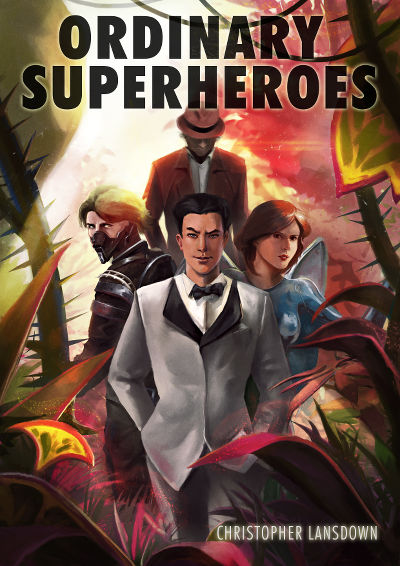 This story is in a strange genre, as it is both an adventure and a comedy. This would not be so unusual if it stayed both, but as the story progresses the comedic tone wanes, though it never entirely disappears. This was not what I intended when I set out to write Ordinary Superheroes, and yet it in retrospect it was not accidental, either. I had meant to rewrite the middle and ending of the story to maintain the comic tone throughout, but during editing, doing that seemed wrong.

Ultimately, I realized that the comedic elements were there not so much because I was trying to write a comedy—though I dearly love to make people laugh—but as a sort of apology. Superheroes are a well-worn genre, and in some elements of this story I make use of some commonly used story elements. A less generous description would be cliches, and when incorporating these elements, I used humor as a sort of apology for using cliches. And yet, I would not write anything else, because I dearly love the classic setup of the adventure story. Indeed, to the true lover of a genre, the cliches of the genre are often indispensible. There is such thing as a good idea, and some ideas are so good—such as the murder mystery in a country mansion—that being original is often possible only by being worse. And if you pause to think about it for a moment, many of the best things in life are absurdly common. Being born to parents, marrying, engendering children—we all do them the same way every time, broadly speaking, and yet they never cease to be exciting.

I am not trying to claim that this story comes close either to those great universal activities which make the blood run hot, or even to the best adventure stories. Being part of the generation which I am, I cannot help but use the conventions, but I also cannot help but use them self consciously. So if I start off in the same manner as half the hero stories ever written, I hope that I can make you laugh while I do it, and that laughing will help you grin and bear it until the story comes into its own. And that, I promise you, it does.